The journey may be long, but the beer is always cold. Many things have changed at Pinelands Brewing Co over the years, but one thing remains the same: commitment to the best beer right from the edge of the pines. Join us as we celebrate our 6th Anniversary, and see what we have in-store for the years to follow.

Just a few of the items you can expect, more to be announced later
-Special Birthday Beer release
-Sextennial Bacchanalia – we barrel aged Quinquennial and its ready for its release. 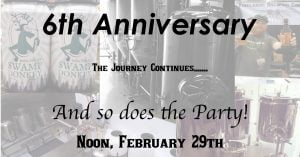